Free Things to do in Tauranga

Tauranga is a vibrant city in one of the most rapidly growing parts of New Zealand. Filled with arts, culture and stunning scenery, there are no shortage of great free activities to take advantage of.

The Tauranga Art Gallery is located right in the centre of downtown Tauranga, and hosts a great selection of historical, modern and contemporary art. The focus is on New Zealand art, and the gallery acts as a great introduction to New Zealand’s vibrant art scene. The gallery is open 10am-4:30pm every day (except for Christmas, Boxing Day and New Year’s Day) and admission is free. 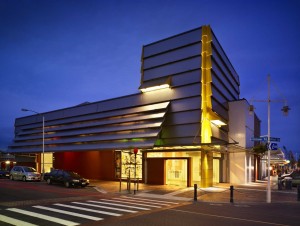 Ten minutes drive out of Tauranga City is McLaren Falls Park, 190 hectares of pastoral and horticultural parkland set alongside Lake McLaren. The park is popular for camping, fishing, kayaking, wedding photos, picnics, bush walks and summertime concerts. It is also home to one of the best botanical collections of trees in the North Island. One of the highlights of the park is the Waterfall Track where you can see glow worms after dusk. Enjoy a short, easy stroll to the picturesque waterfall and spot the glow worms on either side of the track. Part of the Waterfall Track is also wheelchair and mobility scooter friendly. Summer opening hours are from 8am till 7.30pm and if you are in Tauranga in the winter months, you can visit between &,30am and 5.30pm.

imarawhao people. Located on Huria Marae near Tauranga, it is named after an ancestor who was descended from the Takitimu canoe, which landed near Tauranga. The former meeting house was dismantled to make way for a new building, and the remains were buried on Mōtūopae, an urupā (place of burial) in Tauranga Harbour.

Mount Maunganui beach is one of the most iconic beaches in New Zealand, noted for the distinctive outline of "the mount" itself and the white sand. The glorious surf and swimming beach is patrolled by lifeguards throughout the summer and by volunteers for the rest of the 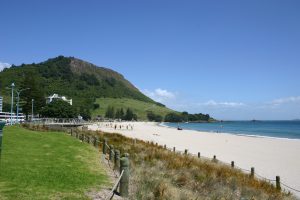 year. The busiest section of the beach is close to Mauao; if you walk eastward toward Papamoa you'll find fewer people and more sand to call your own. In recent years the beach has become even more popular with surfers due to the installation of an artificial reef that produces consistently perfect waves. The reef is located 250m offshore and sits 0.4m below the lowest tide level. As well as a stunning beach, the Mount also offers a great selection of cafés, restaurants and shops, all with the summer holiday vibe you are looking for.

The haiku trail, a pathway of boulders carved with poems, was a millennium project initiated by Tauranga's creative community. Leading haiku poets from around the world gave permission for their poems to be used, and locals are also represented. The trail wanders alongside a stream, and is unique in the Southern Hemisphere. The ongoing project features 31 haiku ‘stones,’ river boulders inscribed with haiku, or short poems. The pathway was officially opened in June 2000, with 24 engraved boulders. The trail runs along both sides of the Uretara Stream behind the town’s main street. A footbridge links the two sides of the stream.

Te Puna Quarry Park has been developed by a dedicated band of volunteers from a disused quarry into a world class park. 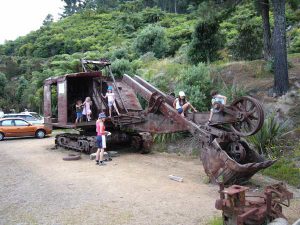 From the upper levels there is a spectacular panoramic view out over the Bay of Plenty. There are ponds, tree ferns, cymbidium orchids by the thousand, native tree plantings and exotics such as vireya rhododendrons - a wild garden of infinite variety. Special garden areas include irises, cacti and succulents, an Australian area, a native Arboretum, a Bonsai corner, a South African area and a Palm Grove. There is also a butterfly garden where monarchs and admirals happily fly free. Sculptures by local artists are featured throughout the park. The Quarry is now becoming popular as an exhibition area for outdoor art and weddings. The walking tracks are easy for the moderately fit.

Are you a TOP 10 Member? Log in here to view your special discount.

Not a TOP 10 Club Member yet?
No stress, sign up here or or close the popup to continue on as a guest.